Jason Happy is a Hero Recon member of FoxTron 7 Team.

Like all Heroes, Jason was created in the Assembly Tower in Makuhero City.

Jason was a rookie, and he went on a mission with his team leader, Adda Banks. The mission went haywire and cost some of the Heroes' lives. Jason managed to get the rest of his teammates to safety. Because of his actions, Jason was asked to join Hero Recon Team, which he accepted.

Jason recently has been upgraded to 5.0. His powers are incredible.

Jason is short-tempered and quick to act. He is smart and fast, and helps everyone on his team. 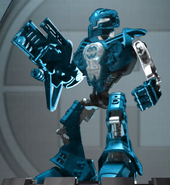 Happy 3.0
Add a photo to this gallery
Retrieved from "https://customherofactory.fandom.com/wiki/Jason_Happy?oldid=75324"
Community content is available under CC-BY-SA unless otherwise noted.